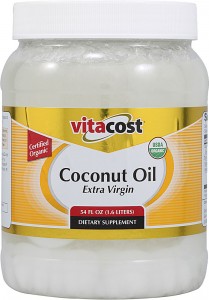 Coconut oil has been touted as one of the best oils you can use in cooking because of its high smoke point (higher than extra virgin olive oil’s, which is usually my go-to oil) and health benefits. Researchers have found that the medium-chain fatty acids (MSCFAs) that comprise coconut oil are easily digested and converted to energy by the body. This is in contrast to long-chain fatty acids such as are found in other saturated fats, like butter. Long-chain fatty acids have a greater tendency to be stored as fat. In fact, recent research suggests that MCFAs can help promote fat loss. So go ahead and cook with extra virgin coconut oil – it’s good for you!

But the health benefits of coconut oil are not the point of this post.

The other day, I was surfing around and stumbled on an article that suggested using coconut oil as a hair conditioner. Intrigued, I logged into my account on MakeUp Alley and was surprised to see it had a 5 lipstick rating. Several reviewers mentioned that it was great at calming frizziness due to humidity. As someone who lives in a climate where it’s always humid, I had to try it.

I already had a huge tub of extra virgin coconut oil on hand since I use it for cooking. I transferred about 1/2 cup into a small bottle and brought it into the shower with me. I shampooed my hair as usual and then applied coconut oil to the ends while I finished my shower. I rinsed out the coconut oil and styled my hair as usual (read: combed it and let it air dry). On the plus side, my hair was not frizzy. But it was lank and greasy – definitely not a good look. Back to the shower for another shampoo.

Amazingly, after the second shampoo, my hair was soft and shiny. So much so that when I went to the gym a day and a half later, one of the regulars commented on how shiny my hair was.

So it seemed that the best way to use coconut oil was as a pre-treatment. Accordingly, when I next showered, I put the coconut oil in my hair first, and let it sit while I lathered up my body. Then I rinsed out of the coconut oil and shampooed and conditioned my hair as usual. Soft, shiny hair resulted. It even held up in the rain! I’m sold. I hear coconut oil is a good moisturizer, too. I’ll be trying that next.